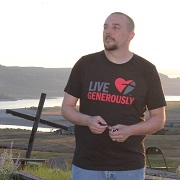 Sometimes a subject, a number or an object comes up over and over again in a person’s life.  This object or phrase seems to keep showing itself in conversations, dreams, stories or testimonies and it makes one think, “God, what are you trying to tell me?”

I have a good friend that is always seeing the numbers 18 or 19, either on the clock, in scripture or hearing them in a normal conversation.  When she hears or sees these numbers, she takes notice, because God seems to be telling her something and she had better listen.  Much like myself, ever since the bombing of the Twin Towers, I am always drawn to look at the clock at the exact time of 9:11.  I always say a prayer for those who lost a loved one on that day when this happens.

So when the two subjects of “Authority” and a “Roaring Lion” came up time and time again over the three days Karrie and I spent at the International Association of Healing Rooms Summit in Spokane, I took notice.

It wasn’t just hearing it in the words of the guest speakers, although it came up again and again from the speakers from Australia, Africa, Montana, Canada and many others.  They all spoke of a lion in some manner in their presentations.  But that wasn’t all.  It became more personal for me.

It wasn’t even that the artist who was painting during worship up front painted a lion right before all of our eyes.  No, it was even more personal than that for me.

At least a dozen people came up to me and Karrie over those three days and spoke the word “Authority” to us.  Or they said they could see a roaring lion in us, near us or on our shirt.  Our shirts had no designs on them; there were no lions in the building that we knew of!  You see, many years ago when I was sick, Karrie’s sister gave me a walking stick.  I used it a lot during my illness.  After I was healed, I put the stick away.  But not long after I was better, that walking stick that had been sitting in the corner collecting dust, started to become a prayer staff.  Then Butch and Kim Stanger blessed it for me.  And then…God did!!  When others saw that staff for the first time, they “sensed” something.  When they held it, they “felt” something.  And when they saw me with it, they “knew” something.  They all used the word “Authority”.

But it gets even more personal.  I did see Jesus at this conference!  Some of you will think I am crazy.  That is okay!  Come and talk to me sometime and I will tell you the whole story.  If you still think I am crazy, well, that will be on you then, because I know what happened to me.  I will give you a little summary here, if I can.

I had what some might call a “vision”; not my first, but by far, the most intense and personal.  I did see Jesus and He did talk to me.  I also saw roaring lions with our King.  But to give you a clearer  perspective, I will break it down like this.  We are all meant to be like roaring lions!  We are to take authority over what God has given us.  What He gives us is power over our one and only true enemy.  We are to act on His behalf with that authority, knowing the whole time that it is not by anything we do, but because of Christ and what He already did, because we can do nothing without Him.  We think we can, the world thinks it can, leaders think they can.  But really, God is the only One with that kind of power and authority.  I had a “wake up call” from on High!

I am nothing special; just a man obeying a call from the Lord God Almighty.  There is a shift coming in our atmosphere.  I believe it has already started.  We must wake up as a body, wake up as a future bride of the King.  We must wake up and take that authority mantle that was placed within each one of us and  begin to roar like we were meant to!  Like a roaring lion, walk in that authority that Jesus gave to us.  The ultimate sacrifice of love was made so that we could live in authority.  I am committed, as well as many others, to praying for every one of you to “wake up and roar!”

Jesse Utz, one of our Saturday prayer team members, writes for The Star in Grand Coulee, Washington.