Perseverance: The race is not always to the swift, but to those who keep on running!

I just completed my first Sprint Triathlon of the year and I got FIRST PLACE! 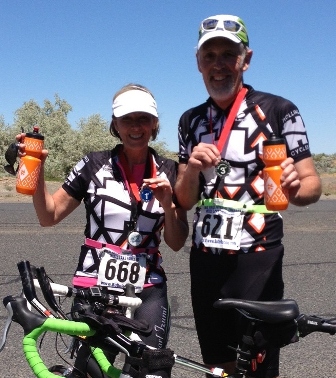 Now let me clarify this.  I got first place in my gender and ‘age group’ which is 55-59.  Did you know that not as many people choose to do triathlons as they get older?  (Ask me and I’ll tell you why!)

I was thrilled, I was excited, I had worked hard to prepare for this event.  Now here’s the dilemma.  When I added to people who asked about the first place medal that I was the only one in my age group for this race, I got mixed reactions.  Many would say I did not need to add the clarification. Just accept the congratulations and enjoy it.  After all, I had put in a lot of effort to actually participate in the race in the first place.  And then there were those who pasted a smile on their faces and just said, “Oh, I see.”  Said in such a way as if I didn’t really deserve an award.  Yep, a ‘Poser’.  That’s what I was being.  Someone who looked the part but wasn’t REALLY a first place finisher.  Though I kind of understood it, if the truth be told, this was the reaction that hurt.

Last Sunday night was the Ironman event in Coeur d’ Alene, ID and I stayed up till after midnight watching until ALL the athletes crossed the finish line.  I was intrigued with all the ‘ordinary’ looking people who even thought to attempt this race.  This isn’t the Sprint version like I just did, this is the BIG Triathlon; 2.4-mile swim, 112-mile bike and 26.2-mile run.  It doesn’t get any bigger than this.

The race started at 6:30 in the morning and officially ended at midnight.  I watched as the Elite and Professional athletes finished ahead of everyone else with truly amazing times like they were super-human.  Then as the more ordinary people ran through the victory lane where the street was lined with screaming fans and spectators cheering them on while the announcer yelled out EACH name and declared, “YOU ARE AN IRONMAN!”  Even for those who crossed the finish line after midnight.  They had done it.  They finished!  I was getting goose-bumps. Very inspiring!

Now I know this next part might be a bit of a stretch here but bear with me. I was reminded of the great cloud of witnesses who are cheering each of us on from Heaven.  Can you picture it?  Can you just imagine that you are being cheered on by ‘a great cloud of witnesses’?  They are cheering, they are clapping, they are yelling out your name and declaring that, “YOU ARE A WINNER."  You really are being cheered on for doing your part in history.  Whether you are the only one in your age group or whether you are the only one doing whatever it is.  If that is your part then DO IT!  And remember what they say about PERSEVERANCE: The race is not always to the swift, but to those who keep on running!  Beloved, my hat is off to you as you keep on running YOUR race!