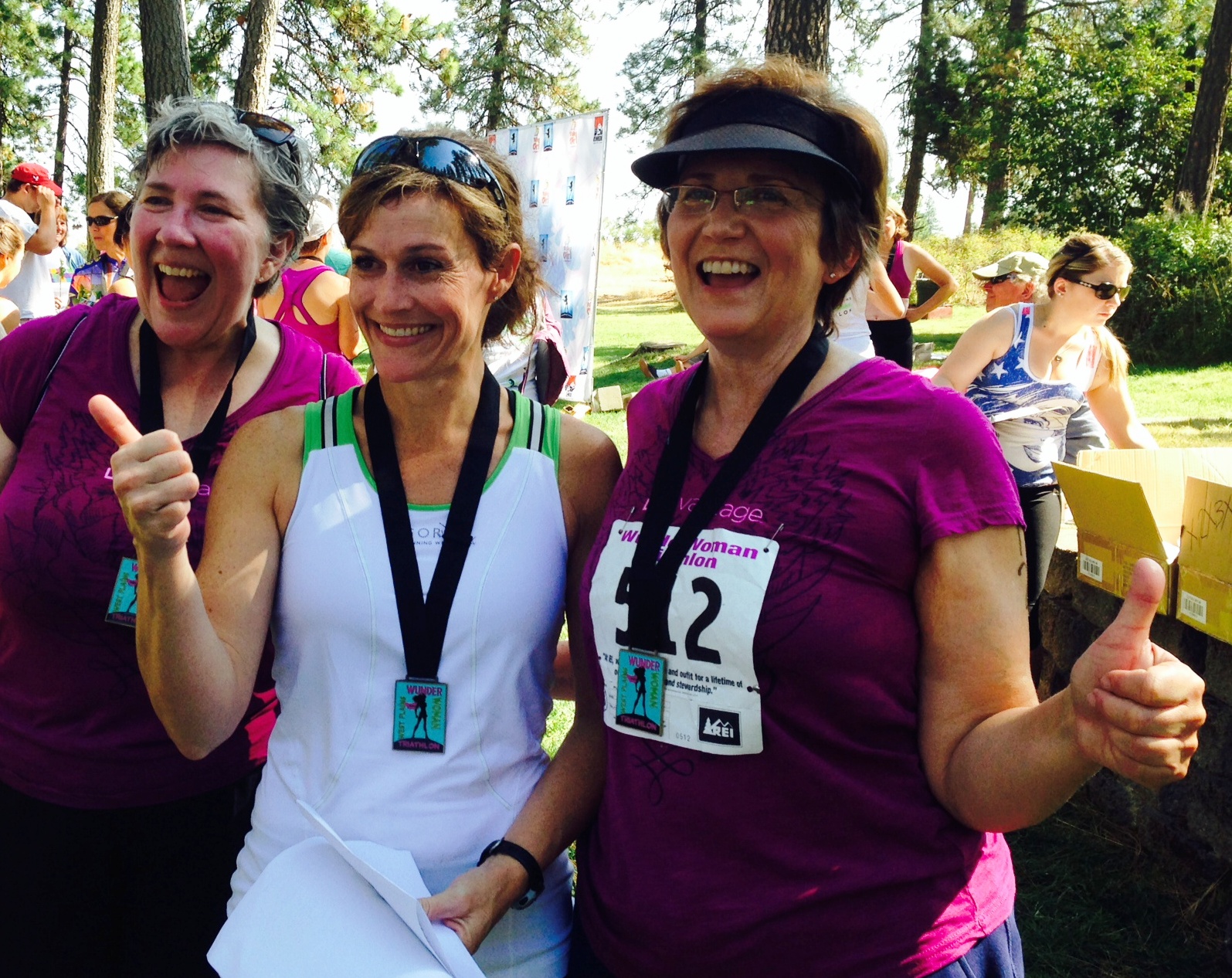 The Wunder Woman Triathlon is now behind me and I am writing this (not a ghostwriter) to prove to you that I actually made it back to shore! I did the swimming portion of the relay, my daughter, Shannon, did the run, and her friend, Julie, did the biking. After being splashed in the face, kicked in the shins, inhaling two-thirds of the lake, and being directionally challenged (read: veering off course), I finally accomplished my year-end goal of being a Wunder Woman finisher and was awarded a t-shirt and a medal, not to mention a couple days of bragging rights!

Let me make it perfectly clear, though, that veering off course was not entirely my fault. You see I emailed the city where the race was being held about painting fluorescent lanes on the bottom of their lake. They failed to do this, so I am blaming them. I know the Lord says to forgive but since He can walk on water, He doesn’t have a clue about what it’s like to cope with 100 frenzied women swimming like their life depended on it! 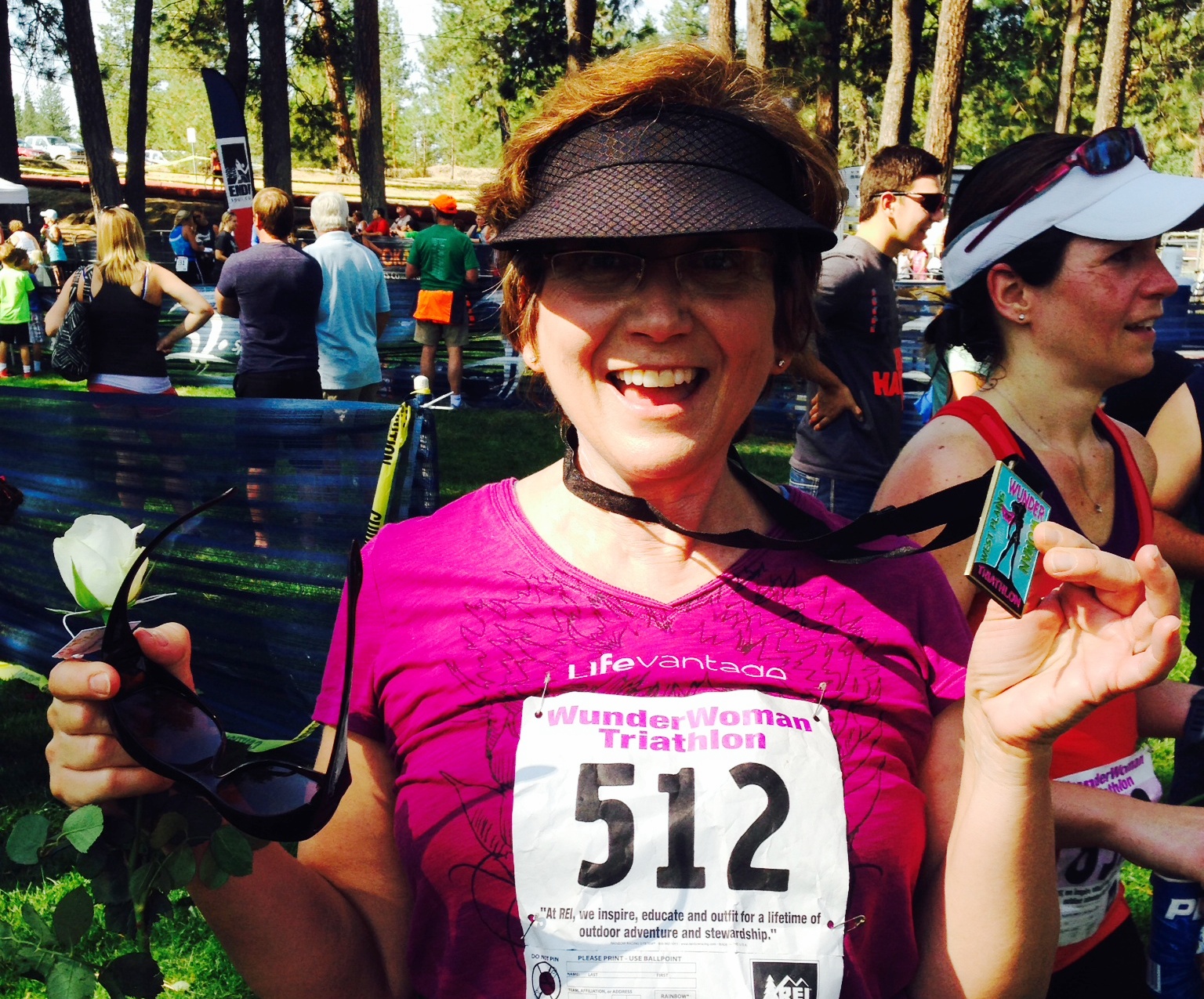 However, the true Wunder Woman of this race was not the individual participants, or the relay teams that placed, nor was it someone like myself who has spent this last year training faithfully most mornings at the YMCA and trying to grow another lung. The TRUE Wunder Woman of this Triathlon was one of our very own faithful volunteer prayer ministers at the Spokane Healing Rooms - Diane Young. Eleven months ago Diane was driving north from Spokane to Canada to visit a friend. While admiring God’s artwork and the beautiful vistas, her car drifted across the line. Over correcting, she sent her car into a spin which resulted in it rolling down a steep embankment.

Miracle #1- There was another car following her that came to her rescue and called 911.
Miracle #2- The embankment she rolled down was within 50’ of two sheer cliff drop-offs.
Miracle # 3 - Although the car rolled several times, breaking her neck in 2 places, she lived.
Miracle # 4 -The doctors were amazed that she was not only alive but not completely paralyzed.

Diane spent the month in a country that was not her own recuperating, resting in the Lord, trusting Him and believing in Him to completely heal her. Although she had to wear a cumbersome metal halo on her head that was screwed onto her collarbones to keep her neck stable, no one ever heard a “why me?” drop from her lips. There was only praise for Him who spared her life, brought her through the ordeal and healed her. She not only had a miraculous physical healing but also had several family relationships healed as well.

Diane never asked, “Why did God do this to me?” She knew that God did not bring this accident and strife upon her, but He knew before she was even born that all of this would happen to her. When the enemy attacks us it’s always a test to see if we respond to God rather than reacting to the enemy. The Lord can then turn that to our advantage. Diane responded to God. She is a testimony to His goodness.

Most of us would want to obliterate from our memory those past 11 months but Diane decided she wanted to celebrate the anniversary of the accident in a positive way, by taking back what the devil tried to steal. So she signed up for the Wunder Woman Triathlon. She was still not physically strong enough to run the course so she walked instead. She asked two of her friends to do the biking and swimming portions of the relay with her, they didn’t hesitate a moment; even though they had only three days to train. (If I only had three days to train I would be writing this to you from my mansion in heaven!) 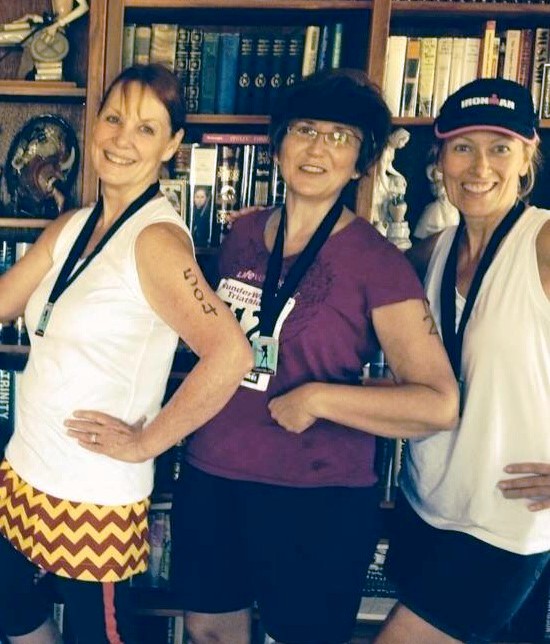 Being true friends, they knew that she needed to finish this year as a winner, not a victim; as a worshipper, not a grumbler; as a warrior, not defeated. She walked the 5K around the lake and, as she crossed the finish line, I am sure the Lord whispered to her, “You may have crossed this finish line but I have so much more for you to accomplish before you cross My finish line!”

Well done, Diane, you are truly a Wondrous Wunder Woman!

Your friend and admirer,