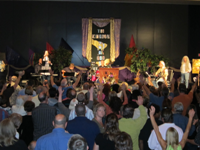 This year's conference was like no other. There was a noticeable increase of God's moving and presence through every aspect of the conference that stirred all who were there to greater levels.

Bill Johnson opened the conference with food for thought that God sometimes doesn't answer our prayers because He wants us to be the answer. How you ask? Through the renewed mind. Romans 12:2: Do not be conformed to this world, but be transformed by the renewal of your mind so that you may prove what is the good and acceptable and the perfect will of God... He went on to say, "The superior collides with the inferior and the inferior adjusts." Wednesday night culminated with the sweet presence of Jesus that swept healing throughout the auditorium. Many with head injuries were healed including the two women pictured below. They had lost their eye sight as children in separate accidents; God healed the one on the right and then she prayed for the one on the left and she was also healed!

One interesting thing that was brought to our attention was that Chuck Pierce was holding the "Head of the Year 5771" Conference in Denton, Texas over the same weekend to usher in the beginning of the Hebraic New Year. Strong prophetic ministry took place there concerning the Healing Rooms! Here are some highlights from that word. Chuck Pierce: "Come out of slumber and enter the new season that is upon you. I say to you we are going to get the harvest." Dutch Sheets: "The foundation has now been laid and you watch and see. I decree to you that in the Healing Rooms of America incredible, supernatural, dramatic, extraordinary signs and wonders are going to take place..." Wow! Portions of this prophetic word were played at the SH Conference on Saturday night and brought great encouragement to all. {Click Here for the video clip.} 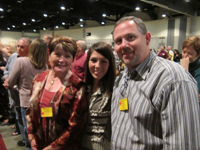 Thursday was power packed. Jim White led by killing off a few "sacred cows." He shared powerfully about his very religious life growing up. He challenged us to begin doing and living in what we've been given and taught. Jesus did it all and provided all that we need. He said, "You don't have to feel 'in' to be 'in.' You're already in." He heard the Lord say, "Happy Birthday! This is the year. We've received prophecies but haven't seen them come to pass. Well, Happy Birthday! This is the year for them to come to pass." Happy New Year!

Cal Pierce was ignited Thursday night like I've never see. He taught that we must start living in the revelation that we were created to be well, not needing healing over and over. He went on to say, "The enemy tells us the fact is you're sick, but Jesus tells us the truth is you're healed. We are moving into a new season in the church to include health in the church, not just to get you healed, but to keep you that way."

The Fire of God and the anointing began to build - he began declaring and warring as he walked back and forth on the stage. We listened and shouted in agreement. I believe there was truly a shift that took place for the whole body of Christ as he released those apostolic declarations. You could feel a few more "sacred cows" tumble. 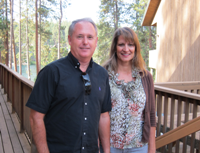 Rick Taylor's message was powerful. He admonished us to stop praying for the sick and start healing the sick as Jesus did. Study it. Jesus used commands...Be clean. Go! Get up take your bed and walk. Arise! (from death). Come out of him. Go your way. Your faith has healed you. Be silent and come out of him. Receive your sight. Once he began training his Healing Rooms team in this, things started happening. Fred who was dying and in a coma got up when the command was given. Cancer left when the cancer was told to go! The spirit of death came off a dead woman when a young team member witnessed her choke and die in a restaurant. When all efforts to save her failed she simply commanded the spirit of death to come off her and be healed. She coughed and stood up. Beni Johnson led us right to the throne Friday morning. She began by reminding us of the beginning of the Hebraic New Year 5771, a season of new authority and power in submission to God. The title of her message was, Shift Happens, the Drought is Over. Just this spring a prophetic word was fulfilled in Redding that the drought would be over when Lake Shasta was again filled with water. After days of rain from March through May this prophecy was fulfilled. After a word is fulfilled then is the time for declaring! The drought is over in all areas of our life, not just the economy. Beni shared many encouraging testimonies and challenged us to be like Caleb, to stand in great opposition and say surely we can take the Promise Land. She reminded us that we have been doing a lot of petitioning and asking. We have to start declaring and agreeing with what God is doing...that we are in a powerful position of authority. Bill Johnson also ministered to us on Friday and Saturday so here are a few more Bill Johnson zingers: Culture - the way we think, live, and our relational boundaries - is like a greenhouse. It causes certain seeds to grow well. In the Kingdom Culture the seeds of the miraculous grow well. We have to start thinking in multiple generations; to set things in motion we will not benefit from. A righteous man will leave an inheritance to his children's children. We need to construct and sow into a supernatural culture that will eventually change the way we do life. God wants to build a people who are addicted to His voice. The affection of our heart must be anchored in a world we can not see. The generation who can do that will be given the world. Sometimes people live without risk to guard a word they've been given from God. The ones who never have to believe for the miraculous never fail. We are in a kingdom of rewards but there have to be choices-challenges-for there to be a reward, i.e. there had to be a tree of good and evil in the garden; you can only walk in the Holy Spirit to the degree we've been challenged. Honor is the backbone of the Kingdom Culture. Sometimes we are waiting for God to send a well-known and respected person to us to give us direction or a word, and we don't recognize that the very person God sent to speak direction was the child or that someone who "has problems"..... We need to honor all people. Celebrate who a person is, not who they are not. Tyler Johnson rocked our world as he spoke in the afternoon about his passion...raising the dead. He clarified through scripture that it is a foundational truth that we should be believing for and expecting. What can I say...get the CD! Scott and Shari Norvell brought a message that I believe is a key to victory in the coming age for the church ~ Terraforming. Scott explained that the only way the enemy can get any power or authority is through unforgiven sin. So, to dismantle him, forgive by the blood of Jesus. Forgive those who may have brought curses to the land and into situations. Again, there is so much more to this. Please visit their website for free teaching, get their book or buy the CD. It's well worth your time. www.terra4ming.com 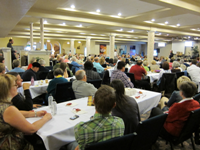 The Director's reception and Partner's luncheon with Bill Johnson as the featured guest speaker were well received. It was a wonderful time of fellowship and gave us a chance to thank and honor all of those who partner with Healing Rooms and run Healing Rooms throughout the world! Thank you for all you do!

The National and International Director's Retreat was held at Ross Point in Post Falls, Idaho again this year. We spent Sunday through Wednesday morning building relationships, sharing ideas and just getting to know one another better. We all agree... it was a very valuable time together. On Sunday the State Directors and Advisors joined us for the day. What a blessing to get together! The video library of the 2010 Spiritual Hunger Conference is available at Royal Crown. 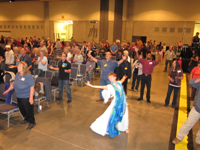 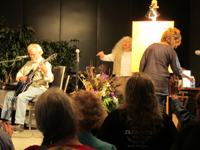 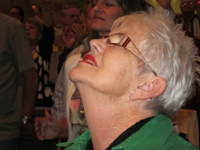