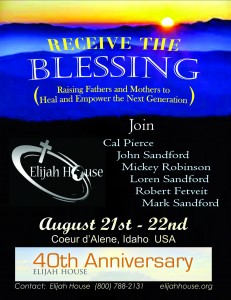 We are excited that Cal and Michelle Pierce will join us August 21-22 to help celebrate Elijah House’s 40th anniversary! Together, we intend to bless the next generation to go far beyond where we have been able to go thus far.

After pastoring churches in Illinois, Kansas and Idaho for 21 years and while raising six children, our founders, John and Paula Sandford, established Elijah House in April of 1975, just 25 miles from the future home of The Healing Rooms!

John and Paula pioneered inner healing, which delves deeply into the root causes of ongoing patterns of sin in the lives of Christians. Their books, Transformation of the Inner Man (1982) and Healing the Wounded Spirit (1985) have since been divided into the four volume Transformation Series. Other books on inner healing include (among others): Restoring the Christian Family (1986), Healing Victims of Sexual Abuse (1988), Why Good People Mess Up (1989), Life Transformed (1991, coauthored with their son, Loren), Deliverance and Inner Healing (1992, coauthored with their son, Mark) Healing for a Woman’s Emotions (1992), and Choosing Forgiveness (1996).

John and Paula also wrote The Elijah Task in 1977—a pioneering work restoring prophetic ministry to the Body of Christ. This book still serves as a guide for the prophetic movement. That work has been furthered by, among others, Healing the Nations (2000) and Elijah Among Us (2002), and by several books on the prophetic authored by their son, Loren.

Paula passed away in 2012, but John has continued to minister and write, including Healing the Earth (2013, coauthored with his son, Mark)—a pioneering work regarding our relationship with nature. John and Mark, along with Mark’s son, Jonah, are drafting a new book about biblical customs—the first book to be written by three generations of the Sandford family! There is much more to come…

Today, Elijah House USA (headed by Mark, who is the Spiritual Director of Elijah House, and his wife, Maureen, along with Executive Director Robert Fetveit and his wife, Kathie) works alongside Elijah Houses in ten other nations (and counting!) to continue the work that John and Paula began.  Elijah House offers training courses, seminars, prayer counseling, and a growing list of books, DVD’s and other publications in many parts of the world.

We are confident that Directors and friends of Healing Rooms Ministries around the world share our passion to bring healing and wholeness to the hearts of fathers, mothers, sons and daughters—from generation to generation. We would love for you to join us in beautiful Coeur d’Alene, Idaho, USA, this August for this very special event and a release of blessing for the next generation.