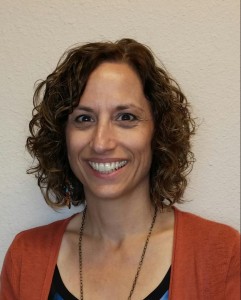 Here in Spokane, we worship on Wednesday through Friday for half an hour every morning with the staff, prayer team, and anyone else who desires to join us. Then we gather as a group to share and pray. During our time of worship one Wednesday morning, on August 19th, 2015, I suddenly received a picture from the Lord: I saw myself holding hands with another person and spinning together as children do. 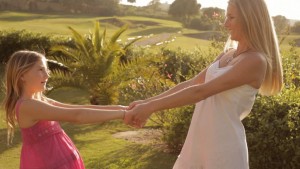 I knew instantly whom I was supposed to ask to join me in this. I stood for a while, negotiating with the Holy Spirit.  That didn't work out so well, so I simply said “yes" to His request to perform this act.  After we had gathered, I went to this person and told her the Lord had asked me to do something and that I needed her assistance. She is a gracious lady and so, without knowing what I was up to, she joined me in the middle of the circle. I briefly told her what I saw and we began to spin.

It was a very powerful moment. Many people felt the power of God come off of us as we spun around and around. Just before we stopped, I was sure my feet weren't even on the floor anymore. My partner felt the same way. Several people gave testimony over the next few days of the impact that this act had on them — including my partner.  I personally had no idea what it was all about and I kept seeking the Lord, asking Him to give me a revelation of this spinning that He had asked me to do.

On Tuesday mornings the staff here at our international office meet together. On Tuesday the 19th, as we were ending this time, the lead intercessor, Thomas Benson, was praying. I suddenly got another picture from the Lord: this time of someone spinning a bucket of liquid over and over above their head.

I loved this as a child. Growing up on my family's dairy farm, I carried a lot of buckets of milk and water to our baby calves and I remember building up the courage to try this thing that baffled me. How did the liquid not spill out of the bucket? 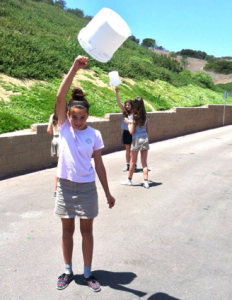 Along with the picture, I heard the words "centrifugal force”, and then I was immediately reminded of the spinning back in August.

The next day I began to research and I found that the bucket spinning is an illustration of two forces: centrifugal and centripetal force. Then I found the word inertia. Can I just say I have never been a science lover? Really, Lord?! Haha! Forgive me all you science folks if I make a bit of a mess of this!

Inertia is the tendency of objects to continue moving in a straight line.

Centrifugal Force is the result of inertia.  It is demonstrated in the spinning bucket illustration as the force that pulls the liquid away from the center point. There is a drawing outward. Think of a car tire as it drives through a muddy surface. The force of the tire turning flings the mud out. (Ever been behind a pickup or semi-truck in mud? Stay back!)

I spent several days trying to grasp what God was showing me, knowing it was a response to my questions about the spinning in August. A couple days later I was in prayer for my sister. There was an event in her past that has continued to be a large wound in her heart, and my heart was truly breaking for her pain. I was petitioning our God and speaking Psalm 147:3: "He heals the brokenhearted and binds up their wounds [curing their pains and their sorrows].” I saw the bucket picture again, and I began to hear Him speak to me regarding our past situations and hurts.

Imagine yourself spinning with the Lord.  This is a fun thing children do. There is joy in the spinning. As we spin (dance?) with our loving Savior, our mud, those past hurts, is flung away from us. The Holy Spirit cleanses and heals us.  THEN, from our time with Him, what is being 'flung' is powerful and impacts those around us with the force of His love and healing.

When we stay in the 'bucket' of our past, the turning, or spinning, over and over of those memories draws us into more pain, depression and, dare I say, oppression of the enemy. We are trapped.

BUT GOD (my two favorite words) reaches His hand toward us to break the enemy’s inertia and draw us into His presence. As we dance (spin) with Him, His anointing flings off the past, washes us clean of those things that bind us, and He transforms us until there is a force coming off our lives that now touches others in a powerful way.

2 Corinthians 10:4 speaks of the weapons of our warfare being mighty through God. What weapons?

Ephesians 6:17 states that we have the Sword of the Spirit. The Amplified Bible translates this as 'the Sword the Spirit wields which is the Word of God'. As we take hold of the Word, turning it over and over in our mind by the power of the Holy Spirit, the force changes from inward and of ourselves to a new center that revolves around and with the Lover of our soul. This took me back to my continuing study of renewing our minds and the mind of Christ. He is always teaching and giving new perspectives to enhance His truths. Praise His Name!

Finally, I looked up the date of the spinning and compared it to the date that He gave me the picture of the spinning bucket: August 19th and January 19th — exactly five months.  Five is the number of grace! God is so FUN!

Instead of the enemy's trap of the same motion over and over that draws us into a pit, let's spin with The One who changes what exists in the natural into what is, in Him, the supernatural. I pray you receive His grace which super abounds toward you today to break the cycles in your life. And instead break into freedom and powerful anointing as you stand hand in hand spinning with Him in the power of His Force — which is Freedom from the traps of the enemy. He is faithful to provide a way of escape.

I end with this prayer from Ephesians 1 -

Thank You, Father, for granting each person who reads this a spirit of wisdom and revelation into the deep and intimate knowledge of Jesus. I declare the eyes of each heart are flooded with light so they can know and understand: the hope You have called them to, how rich is Your glorious inheritance in the saints, and what is the immeasurable greatness of Your power in and for us who believe - this power that was demonstrated in the working of Your mighty strength which You exerted in Christ when You raised Him from the dead and seated Him at Your own right hand in the Heavenly places, where You have seated us, with Him, to the praise of Your glory.  Amen.

Final Note: As I prayed over this for each of you, I heard the chorus from a song rise up in me:

He is always with You and will never leave you.

Cathy Hopkins is on the prayer team and the IAHR Assistant at Spokane Headquarters in Spokane, WA.
chopkins@healingrooms.com